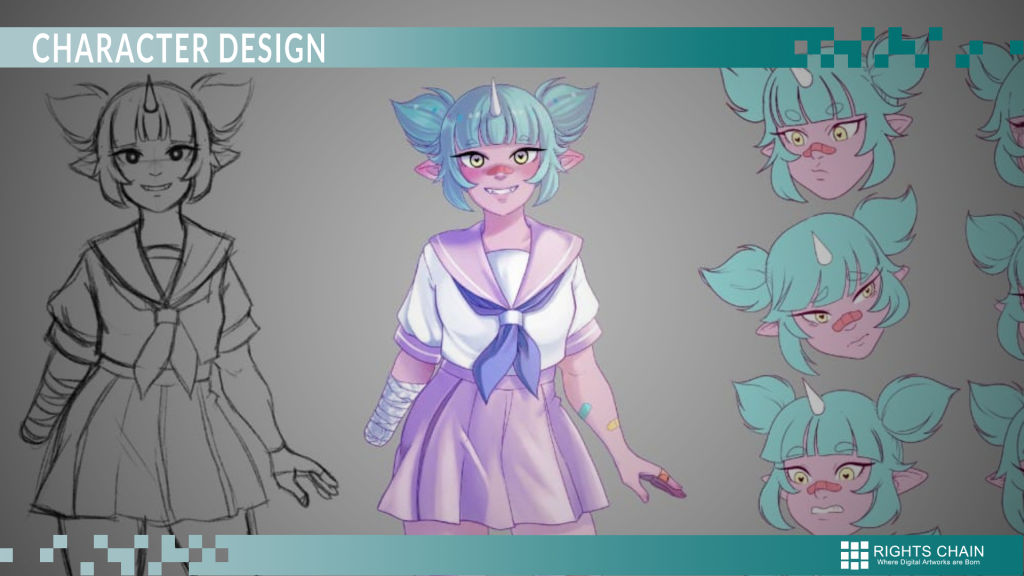 Character Design is the design of a character in all its features; not just from a physical perspective, but from a personality point of view as well.

To make a fictional character realistic, it must be cohesive personality-wise; even extremely imaginatively-designed characters can be realistic, if their emotions are properly contextualised and they are given a solid personality.

When a Character Designer creates a character and has to introduce it to the publi, or to anyone in general, they do it through the use of a Character Sheet, which gives the character presentation. There are several types of character sheet, but they all have quite the same purpose: introducing the character in the most complete yet concise way possible.

They are usually entirely drawn and generally include one full-figure drawing of the character, plus a number of facial expressions that describe the character's personality. Characters often need objects or have belongings with a specific meaning; therefore it's very important to include a representation of such objects in the character sheet as well.

Even clothing, colours and hairstyle give different interpretations of a character: for instance, a short-haired character normally conveys the idea of an energetic person, a pair of glasses that of a reflective, diligent one, while a girl with red hair gives the idea of someone with more interior strength compared to one with black hair, as different aesthetic canons give different impressions of the character.

A character's personality doesn't necessarily have to correspond with the general impression their looks give, however: it could be that in our story the character is to be a surprising one, therefore conveying a certain type of personality through their looks, but then revealing to be completely different. Creating such a character is of course a lot more complex, as they will need to have some detail or object with them that somehow recalls their true personality.

As you can see, designing a character is not simple; it's not merely a selection of features we like, mixed together. On the contrary, a number of linked elements can lead to a well-designed character, if the final objective is clear.

As they are a representation of human ingenuity, character designs (and character sheets as well) are protected under the Berne Convention and are therefore copyrighted. They can be licenced with a restrictive licence, or a more open one. A famous example of a character with an open licence is the VOCALOID Hatsune Miku, which has been used for years in countless music videos and illustrations. Hatsune Miku is licenced under a Creative Commons CC BY-NC licence, which allows the character to be used by anyone for any non-commercial purpose.

My advice on this matter is to always register your characters and to always attribute a licence that best suits your rights on your work. It's important for all artists to promote themselves online, but it's just as important to take some precautions, because the Internet does allow us to share our works instantly with the whole world, but it also gives anyone the chance to use it in our place.