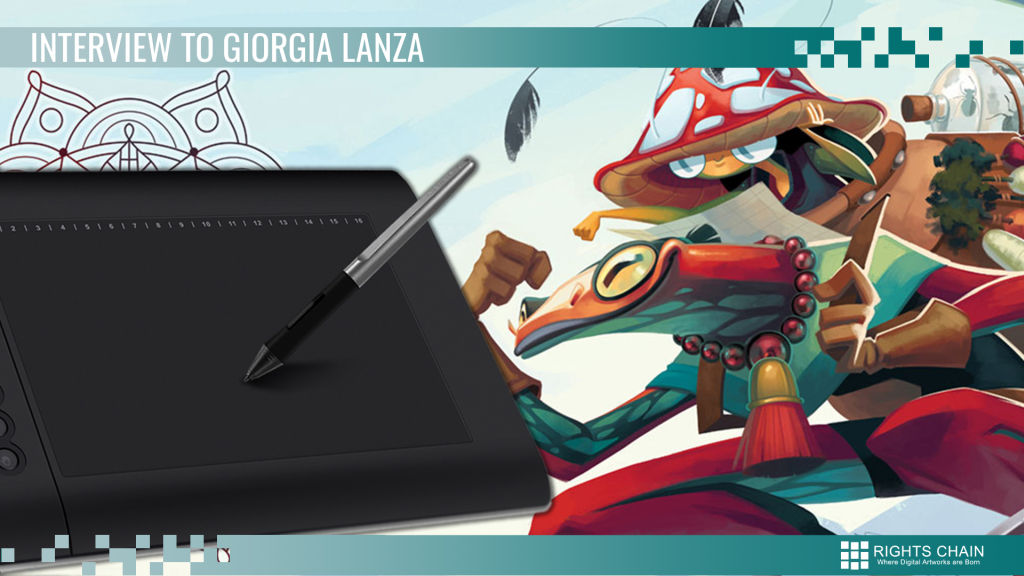 Today Rights Chain is interviewing Giorgia Lanza, freelance illustrator and teacher of Concept Art and Digital Illustration at "Event Horizon - School of Digital Arts". Not long ago, she experienced the removal of her content being used without her permission. In this interview, she tells us about the incident and how she handled the situation.

1 - Can you explain what happened?

Of course, One day I found out that Huion (famous graphics tablets manufacturer exporting all over the world) had been using my art to advertise their latest product without my authorisation.

2 - How did you find out about this? What countermeasures did you take?

I found out about this thanks to a colleague who informed me of a product for sale on Amazon. Since the use of my works wasn't justified in any way - as I had never given permission - I got in touch with Amazon, the reseller and Huion itself. At first I didn't know whether the reseller was officially authorised so I took the first step, leaving them the benefit of the doubt. Later I discovered that it was indeed an official Huion reseller, therefore it was the company that needed to manage the situation directly. It didn't take long for Huion to reply: according to them, in May I had participated to a competition by CGTrader.com, the rules of which included that all participants were agreeing to their works being used for commercial purposes by the sponsors, among which was Huion.

I was rather unsettled by the idea of having agreed to such opportunistic rules (an art competition aiming to create a free promo-art gallery for its sponsors), so I checked the rules again as months later I couldn't remember anything about.
To be fair, the rule they mentioned did exist, with a very important "but" however. The rules specified "the use for marketing purposes could be done DURING the competition". There wasn't a single point mentioning the extension of such privilege until after the competition end date.

Besides that, the competition recognised the "copyright on the work, which would have remained property of the artist both during and after the competition". You can't override copyright like that - especially if officially recognised. "Copyright" means that to use my work you need to contact me, send me an email concerning your intentions and ask for my permission, you can't just do whatever you want with it.

Besides, my drawings hadn't just been used without my permission; they were cut out, cropped, edited and altered. In other words, all of the creative identity of my illustrations was adulterated.

My answer on this matter was firm. Dozens of colleagues supported me, telling me I was doing the right thing, have been vital in this situation."

"Once these complaints were made, Huion immediately changed its stance on the whole incident, saying I was rights and informing me that they would not only remove my pictures but also let all sponsors know not to use any picture from that competition, as the rules were too generic and shady to support such use.
When I requested to receive a formal statement declaring the interruption fo usage of my pictures for commercial purposes, they didn't bat an eye.
We're still negotiating privately to see how we can get out of this situation "evenly". Sure, they definitely dodget a bullet, but I also earned something from this whole situation as well. I will probably allow the use of my pictures after signing an agreement that recognises me some revenue and the right to call myself a Huion testimonial on my resume."

4 - How did you feel and what would you say is the worst damage that was done to you?

"I felt betrayed by both Huion and the competition organiser. I know there's plenty of looters in the worldm but I had hoped there would be more transparency towards the artists, at least from those who claim to support and encourage them."

5 - How did Huion behave and why do you think they did what they did and gave those justifications?

"I think the Huion customer service handled this cleverly. They realised that the risk of a pandemonium erupting (potentially going viral, if I translated it into English) was real and they chose to compromise.

I already know that their "we didn't notice the mistake" excuse didn't really fly. Up until a couple of emails before, they were taking up the competition rules as an untouchable barrier, which means they were well aware of what the rules said and of the potential voids left by improper syntax. They were probably counting on the fact that a minor, emerging author wouldn't dare face a big multinational company and that they would be honoured to see one of their works on a Huion device. They weren't lucky. I stopped accepting payments in "visibility" a while ago.

That said, I appreciated their availability. I read about companies that completely ignore any complaint and hide behind their army of lawyers. Huion instead has been perfectly civil.

6 - How are you planning to protect your works in the future and what advice would you give to someone who is in the same situation?

"I'll be honest: registering a trademark (which may even just be my name) would be too expensive. All I can do is be sure that I store all PSD files of my artworks, so I have some proof. I can often also cout on the date of my social media posts.

What I can absolutely suggest is learning about their rights as creators, so that they can defend and protect themselves adequately in similar situations. If I didn't have a couple of notions of my own, I never would have had the courage to face them."

7 - Would you trust Rights Chain to protect your artworks? Why?

"If someone doesn't have the ability to follow any and all potential scams in the world, then absolutely. Designating someone more competent can be very wise, if you realise you can't do everything on your own. If instead you have four strong stomachs and are willing to pour bile on sly foxes, then good luck. You will need to keep your eyes peeled at all times, always be wary and wear ironclad underwear, although I find this good life advice either way."

8 - Is there anything we could do better to protect artists and their artworks? Give us your honest opinion.

"I really don't know. The Internet is too big and dangerous to fully guarantee legitimate intentions regarding our creations. I don't think we can ever be 100% safe.

The starting point is most likely proper information on the matter, but I also think that after a certain point companies such as yours leave space to the responsibility of each artist.
That said, I'd like to thank you for the space you gave me and for your support to me and other artists who - like me - will not accept these situations.