Brand Identity between Fan Art and copyright: Samsung and Sam 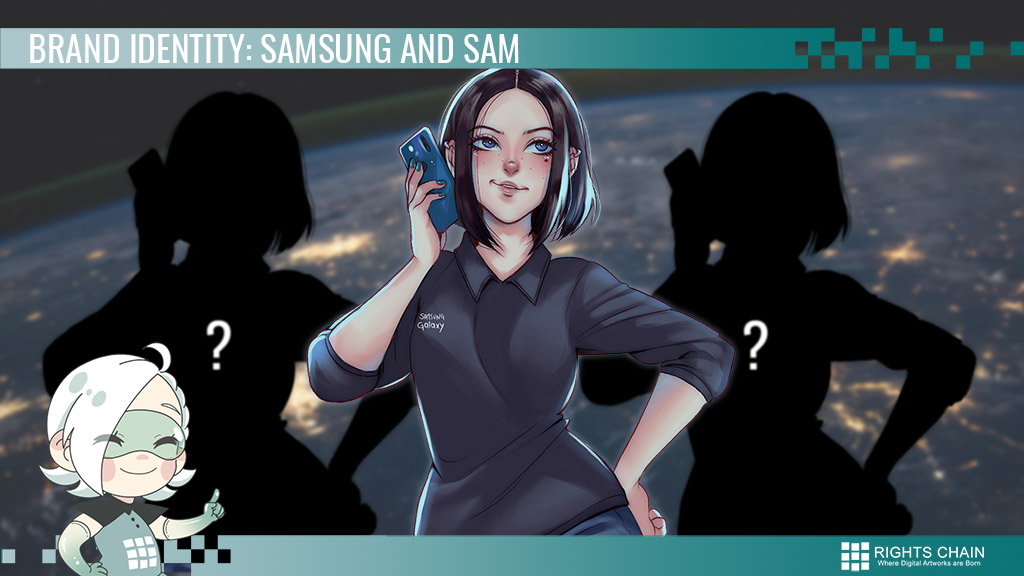 Corporate communication is not a simple matter. Capturing the public's attention, keeping it and then converting it into a profit. Every day we see hours and hours of advertising and headlines that try to grab our attention with slogans such as 'you won't believe what happened' or 'the reaction will leave you speechless'. Not to mention those headlines that focus on fear.

Then there are the phenomena that go viral, and this is something that cannot be planned in advance.

Sam, the new version of Samsung's virtual assistant, is a perfect example of this phenomenon and it has been very interesting to observe it from different aspects.

Although content related to Samsung's announced virtual assistant has been removed from the Korean manufacturer's press areas, quintals of 'Sam' fanart and cosplay can still be found on social media.

We don't know the reasons why the official material has been removed (at least from the institutional sites), but we are not here to judge the communication choices of companies that have the flagship of their corporate communication at their disposal. And we are certainly not going to comment or review on what the new functionalities of a mobile phone are.

The smartphone era has dramatically changed the way we approach technology. Everything is at our fingertips: literally. The phone has become an extension of most of us.

With everyone's individual preferences, they are becoming more and more a part of our lives, trying to create a new way of interacting with the digital world. Every week, dozens of companies propose new chatbots based on 'artificial intelligence' that can improve the user experience by offering an alleged 'unprecedented customer service'.

Leaving aside the quality of these systems, one thing that is still largely overlooked is the interface.

Let's take a case in point: Cortana. The one appearing in Halo, not the one we know of in Windows 10.

How much would the user experience improve if there was a face listening to our request instead of a blank screen?

But let's move on to the subject of this post: how much creativity has Sam unleashed from the community?

The uncontrollable machine of the Internet: the fandom. Any content platform provide results when searching for "Samsung Sam": Pinterest, Twitter, any image search engine and dedicated portals return results galore. 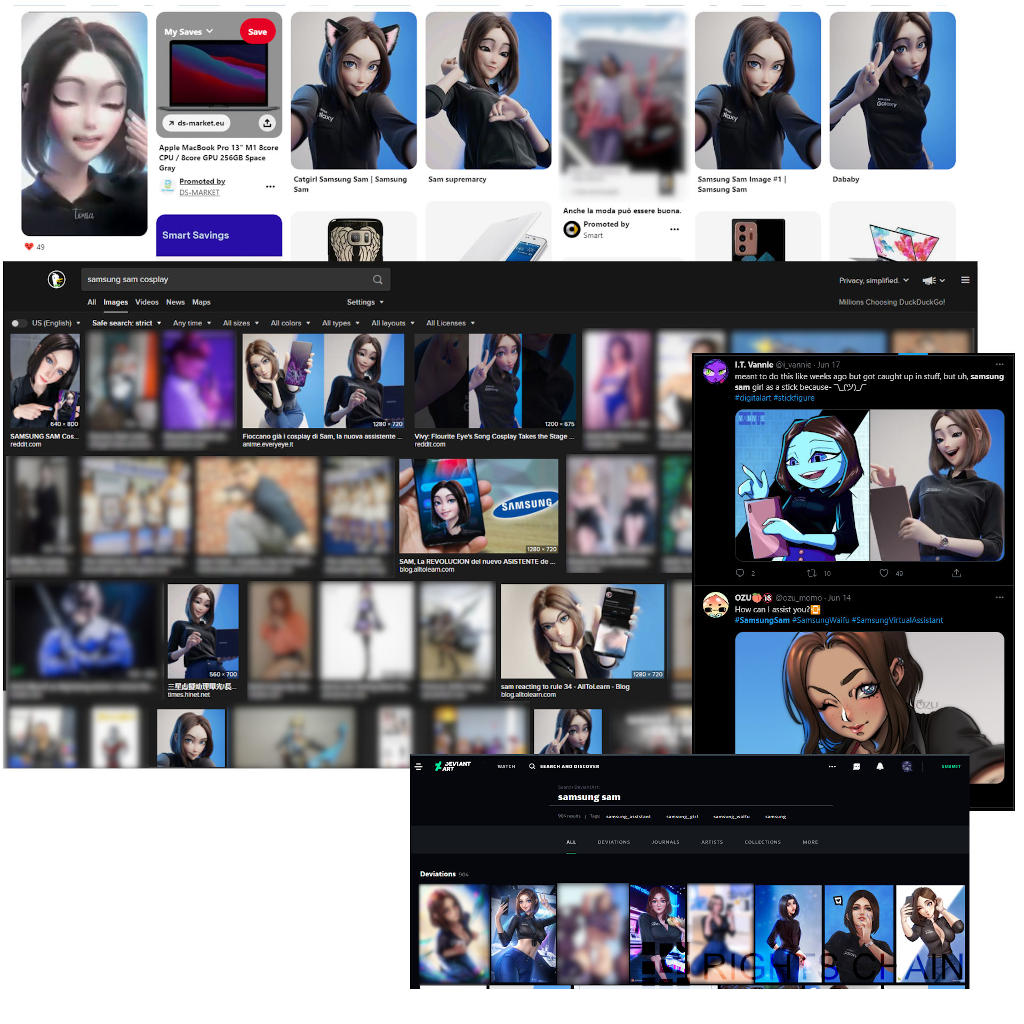 In the past we have already seen communities create "humanisations" of everything: the first examples that would come to mind are Earth-chan for World Earth Day, Black Hole-chan inspired by the well-known photograph of the black hole, Corona-chan who - for better or worse - personifies the virus that triggered the pandemic. But there are also more business-related examples where we find humanised Playstation and Xbox mascots.

From a communication psychology point of view, it is much easier and more natural to interact with something that has a human appearance. A typically oriental approach in which communication through tools such as comics and animation has an important cultural heritage. It is no coincidence, in fact, that the Japanese suffix '-chan' is frequently used next to the character's name (in fact, slang from the Japanese language is increasingly used thanks to the spread of Manga and Anime).

From the point of view of marketing and dissemination, however, this is the kind of content that has the greatest chance of going viral. A character that stands out and stands out from the others is more memorable than a product that is the same as a thousand others. Sam is an example of a character design that worked: it moved the audience, it drew people's attention to the brand's new digital assistant, it went viral.

In the past, we have already talked about how "fandom" is not only a powerful marketing tool, but is also able to give a level of perception on how well a campaign is performing. Again, we can give examples of how fandom has contributed to the spread of a product: for example games like "Genshin Impact" or indies like "Hell Taker", or series that have become mainstream thanks to the engagement that fans have created around the phenomenon.

Whereas there may be a lack of "culture" around the phenomena of fandom on the Internet, the asian market - once again - provide examples of how the issue of fanart is taken seriously, as in the case of Neon Genesis Evangelion where the producer has limited the way in which fanart can be created (but we will come back to this in a moment).

Another custom that the "western" world has imported from Japan is Cosplay, i.e. the art of wearing costumes of one's favourite characters and impersonating them in every possible occasion: starting from themed events, passing through comic fairs and the like, up to live streaming and live events. Here too, we could list a long list of events, but we'll leave that to our media partners who already cover the subject (and the organisation of events) extensively.

When one or more cosplayers decide to play a character, it is what we internally consider a "level up" in the public's appreciation of that character.

Although illustration is not an easy work to create, cosplay is certainly no less, since we enter the sphere of fashion design. An enormous amount of work considering that, in most cases, cosplayers make the garments themselves. This includes studying the costume or clothing, finding the material with which to create the costume, fitting it, trying it on, wearing it and taking photos.

For all those who still think that cosplayers are lazy bums who get lost in nonsense: it is time to change your perspective.

In Sam's case, the clothing concept may not have been the most sought-after, but it is probably also one of the reasons why he was so successful.

"Rule 34: if something exists, there is a p*rnographic version of it."

The above statement may sound as an affront, but it is a shared Internet maxim.

From a reputation and brand image perspective, it can become one of the biggest stumbling blocks in communication.

When a phenomenon (any) becomes viral and involves the fandom, it follows an "all or nothing" rule and it starts living its own life. This means that there is also an alternative version of the character that falls into the sphere of eroticism or pornography.

Something that cannot be underestimated or ignored because, sometimes, it can have serious repercussions.

Returning to the above-mentioned example of Neon Genesis Evangelion, the production company is engaged in a constant monitoring of the Internet in search of infringing material (moral in this case) and requests to takedown infringing content.

Sam's case was no different, and content falling under Rule 34 appeared on various channels and social media, again involving both illustrators and hero-cosplayers (out of respect for the brand in question, in the preview above, we have excluded such results).

The world of communication has changed profoundly, and creativity is now more crucial than ever in making a difference in the market. Personally, I didn't even know that the brand in question had a digital assistant, commonly the smartphone market tries to distinguish itself by the type of camera it offers. And even here, one could point out that the camera is nothing more than a tool for creators to take better and better photographs.

45% of the European Union's economic activity is attributable to the intellectual property industry, worth €6.6 trillion in patents, trademarks, industrial design and copyright (source: EUIPO Observatory).

A single event involving (literally) a world of creative people in multiple sectors:

The Internet has changed the way we communicate: the question is whether we have understood how it has changed and how to adapt, in our own way, to this new generation.

From our side (Rights Chain's, ed.) it is clear that the creative content is so massive that neglecting it could prove to be a fatal mistake. Both from the point of view of creatives capable of creating content that attracts the interest of the public (see the example of the Italian TikToker Khaby Lame), and of companies that have to create their own image and online reputation to maintain their presence in the market.

Do you create original content and are you looking for tools or support to protect your work? Our rcRMS platform for Creatives has been created specifically to facilitate this work.

Is your company looking for solutions and support to protect its Intellectual Property? rcRMS for Business is the business version of our platform for corporate copyright management. Contact us for more information about our services and solutions for business.

This content has been produced by Rights Chain Ltd. and reproduction is permitted only under the Creative Commons licence CC BY-NC-ND.

The content is for informational purposes only and does not constitute legal advice, in whole or in part.

Rights Chain Ltd. is not affiliated with, and has no business relationship with, any of the trademarks mentioned in this article, unless otherwise expressly noted.

Samsung is a registered trademark of Samsung Electronics in the respective countries.

All other trademarks are the property of their respective owners.

More than 25 years of experience in IT and cyber security, since 2017 he has been working on intellectual property and copyright protection.