So, what happens when your art gets posted by an influencer? 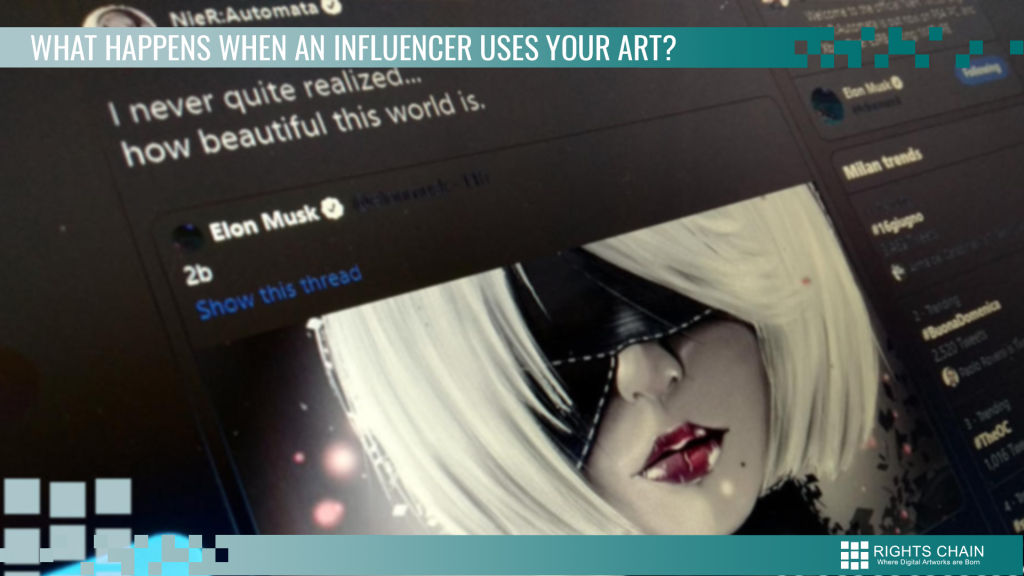 We’ve been throughout this a lot of times, and yet it happens daily. Among the time, it hits me directly when it happens, and this brings me to posts like this.

On June 16th as she defines herself, “a little artist in this big world” going by the name Meli Melo posted on her Twitter profile some of her works. Among the works, an impressive drawing of 2B, the NieR:Automata RPG game by Square Enix. Should I say, her work is absolutely mind blowing.

Fun thing is, her work has been tweeted, without any kind of credit, by no less than Elon Musk, which shortly has been retweeted, again, by NieR:Automata official Twitter account itself.

Amazing right? I mean, being launched by a so important accounts?

Elon Musk’s tweet gained 99,9K likes and 15.2K retweets as I am writing this post, about 9 hours after the post. Square Enix’s post have a count of 7.2K likes and 1.4K retweets. A massive coverage and impressive visibility.

If she got credited correctly.

This keeps happening constantly and does do more harm than benefit to the artist, whereas with our current attention span, the compulsive like we’ll leave on that drawing will be the last thing we do before getting further on the timeline.

Gladly her fans or followers are aware of the problem, and somebody posted right below Musk’s post the tweet with the link to the original post. Thanks to the fan-base, her account has grown by 100 followers in the last hour, bringing her to 2.300 followers at this time, while her pinned post with the original artwork and link to her Artstation profile, is counting a modest 200 likes count (the picture below has been taken two hours before this post was going online)

A shame compared to the above numbers.

So what is this all about?

It’s about the fact big social media channels and sites keep living on the creative works done by others, giving them little or no mean of protection. You may feel free to mark the artwork as in copyright infringement, whereas it is infringing Meli Melo’s moral right to have attribution to her own work. I know, 2B character's design is not her own since it's "just a fan-art", but does it make any less her very own work and interpretation of the original character?

But then, Twitter would probably take down the content bringing more harm than benefit to the author.

Another perspective is that the notoriety of Meli Melo’s might increase slightly after this event, and she might become victim of scams or impersonation where someone else could steal her work and make profit out of her luck. Sadly, we've witnessed this happening not very long ago with another Artist.

Does this mean influencers of caliber of Elon Musk (which, for the record, I personally admire) is intentionally malicious? Not really, I don't think so and I am not willing to make anyone think of it. I actually think it's a lack of big platforms like Twitter, that does not allow an Author or Artist to request a correct attribution on their own work if posted by someone else.

We are working hard at Rights Chain to build a platform where Authors and Artists can protect their work by creating a digital “certificate of birth” of their works, allowing them to have a proof of creation of every single work they create and register.

What do you think? Would you like to let us know your experience or opinion? We are glad to talk with you who create Art to know your point of view. Get in touch with us throughout any of our channels: