EU Directive on Copyright: for big publishers, but not for independent authors 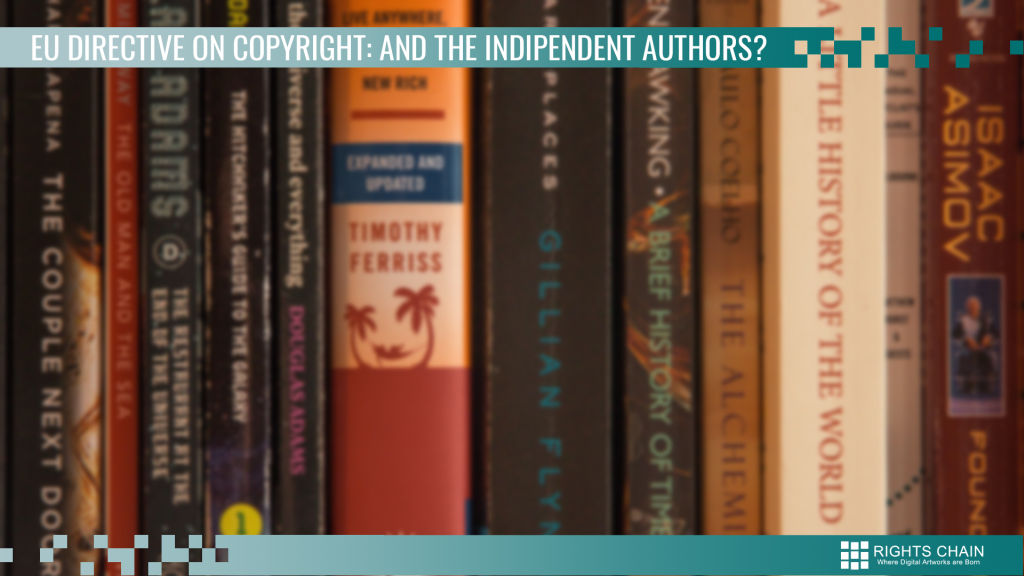 On March 26th, 2019 the EU (European Union) approved a Directive that takes the name of:

It has been in the talks for years, along with various outcries from important organizations such as Wikipedia, which during election time obscured its website as a form of protest.
There have been multiple displays during the same year, with thousands of people revolting against what appeared to be a law that would have limited freedom of speech a lot.

Despite the good omens and wishful thinking that seemed to arise on September 2019, our politicians declared that the directive was on his way to be approved, along with some of the folly with it.

Long story short: in the next two years, all EU countries will have to adhere to the new directive on copyright. A fun fact to notice is that France immediately put such directive in act and is now pushing other fellow countries to follow suit.

Let us make one thing clear: the reform of copyright rules was necessary.
Internet has deeply changed just about everything regarding such topic, starting with the fact that the “regulations” we are currently using date back to 1996 and 2001. In contrast with the technological progress we all went through from the year 2000 onward, things have drastically changed.

Drastically because we have a tool which allows us to launch contents and creations in an instant, without having to rely on a “publisher” that rules over afore mentioned content (and its rights of usage). This gave a huge opportunity to thousands of creators to show their talents or simply share their creativity.

Drastically because the rising use of social media and the easy access to such works has created an unhealthy mechanism of “Copy/Paste” which hurts the authors and creators alike, changing the nature of piracy ( as in; the sale of others' intellectual properties or unauthorized copies) and adding on-line scams, which we constantly monitor during our everyday work, while we follow various social profiles of different artists.

The directive was needed. As it was proposed it would have been disadvantageous, and we also covered the topic in our blog. We even expressed some individual opinions through our personal profiles: as for me, they were mostly about the technological aspect, due to some thoughts after reading the set of rules. The general idea we all came to be was that it would potentially have a negative impact on small or independent publishers.

Now that the reform has been approved, more and more stories written by much more qualified people have started to emerge. Among them, the lawyer Andrea Monti writes about technology and copyright, in one of his articles published by the Italian magazine “PC Professionale” and on his blog with the title: “The directive on copyright doesn't protect authors and puts the fundamental rights of people in danger”

It is obvious that the EU wanted to turn things for the better, but at the same time it showed the ability to achieve the opposite goal.

Why doesn't it protect small authors?

According to the directive, all platforms that use created content must come to an agreement with whoever holds the rights to such content in order to properly use it.

To set an example: If I were to post online a creation of mine on a platform (for example, a video), I should contact the manager of such service and find a way to give him a full, crystal-clear, permit to use and spread my work as they see fit.

Considering that it will be the very platform to take blame for any copyright infringement issues, any threat to fall in such deep trouble will only lead to a single conclusion: content removal.

No matters the infringement was real or not.

So, if a complaint regarding copyright issues is to reach the platform I'm using, it will protect its own interest (not the creator's) by removing any content in order to avoid legal persecution.

How will small authors defend themselves?

In which way a directive built like this can be used to spread culture and creativity?

In what ways does it protect independent creators, exactly?

Taking a quote directly from Mr. Andrea Monti, it would have been much more honest to call such set of laws from EU Commission “Norms defending content trade”

Is there no solution?

Rights Chain keeps working in creating tools to help artists protect and manage their work on the web. During the first half of 2019 we even released the first solution aimed at agencies or organizations actively working along various artists: rcRMS.

Through Rights Chain, artists can submit their works and immediately get a certificate that they can use to reclaim legitimate ownership (Want to know more?).

Through rcRMS, Agencies (publishers, communication agencies, etc.), Organizations or Artist Collectives can manage the trade of highly creative works (Illustrations, photographs and soon even written works and videos) granting the traceability of authors (Moral rights) and transfer of ownership or the concession of usage.

Both said solutions form a solid base to build on, in order to protect and manage your own work.